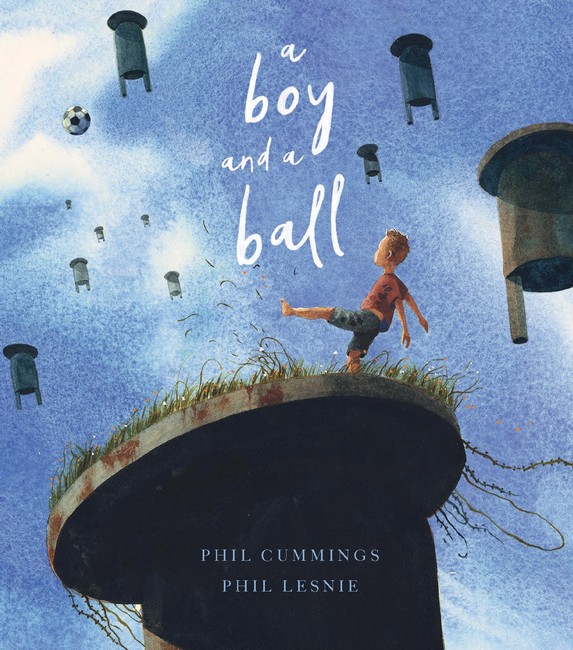 A Boy and a Ball

https://bookcurator.com.au/shop/product/9781743812525-a-boy-and-a-ball-108155
The cloudless sky suddenly roared like thunder.
Shadows, swift and frightening, descended.
The boy’s brother grabbed him by the arm.
Run, quickly,
But my ball.
Leave it.
From the Prime Minister’s Literary Award-shortlisted creators of Feathers, comes this compassionate tale of a family’s search for a safe place to call home.

The boy loves to play soccer with his big brother in the streets of their city, which are in ruins. Strange, hulking black shapes of war machines lie abandoned in gutted buildings. One day, the war machines come to their city again. Though the boy and his family are safe, he loses his ball. His father decides that they need to travel to a new land – he explains to the boy that he will get a new ball there, and will be able to play on green grass.
Their journey is long and harrowing. The boy gets sick, as do many of the passengers on their boat. When they finally reach their destination, they find that identical, black war machines are waiting for them there.
The boy adjusts well to life in the detention centre. He gets a new ball, and he plays on green grass. When he kicks the ball over the fence at the edge of the centre, he thinks he’s lost it again – but a girl on the other side picks it up for him.
This story is a powerfully visual metaphor for the journey of a refugee – the ball acts as a symbol of the boy’s possessions, sense of safety, and home. A gentle way to introduce concepts like asylum seekers, the need to escape war zones, and the importance of being accepting and welcoming of others. The image of the girl picking up the ball at the end leaves an indelible mark on the imagination.