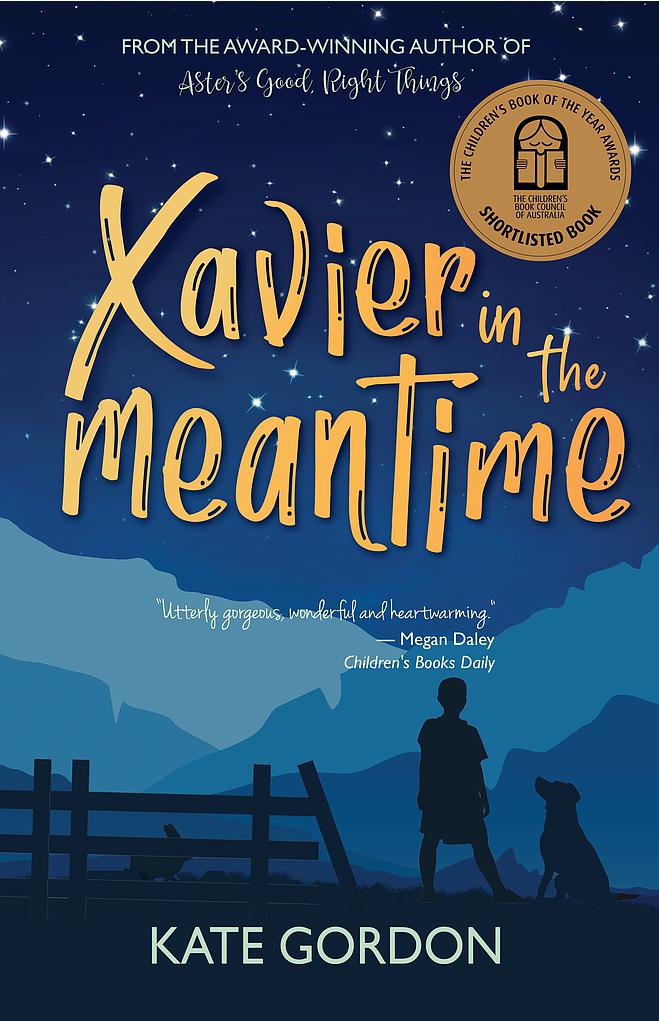 Xavier in the Meantime

Every new doctor … this will fix it.

Removing him from school … this will fix it.

The therapy group … this will fix it.

And his dad moving out. Maybe, this will fix it.

Despite his positive affirmations, the black dog never really leaves him. It watches from the corner of his room, never straying too far away—waiting for the perfect opportunity to sink its teeth in.

But Xavier has a plan—one he hopes will help all the kids in his support group. Enlisting the help of best friend Aster, he tries to convince his dad to turn the family sheep farm into a therapy retreat for the group session kids. But he is up against decades of tradition, his parents who are on a “break,” and the spectre of the black dog.

Activity worksheets for this title are available from:

Set in a small town in Tasmania, Xavier in the Meantime is a companion novel to the 2021 CBCA winning Aster’s Good, Right Things that puts Aster’s best friend—Xavier Atkins—in the spotlight.

Xavier is an 11-year-old boy who lives with depression and uses his daily affirmations to try and stay positive, but the “black dog” continues to stalk him. His father has moved to the family’s hogget (sheep) farm while the regular tenants are travelling, and although both his parents deny it, Xavier thinks they are separating.

Xavier attends group therapy sessions led by their well-meaning but frustrated counsellor, Maren. The kids are not enthused about writing their feelings, except for Willow who is a poet. Xavier tries writing his own poetry, which is interspersed throughout the novel.

Along with best friend Aster, Xavier hatches a grand plan to help the kids in his therapy group and to save the sheep on the family farm: he wants to turn it into a mental health therapy retreat. His father, though supportive of Xavier, tells him they must be practical;  the farm is their only financial support.

Meanwhile, Aster experiences difficulties at home as Indigo Michael, Aunt Noni’s new foster child and Aster’s former classroom bully, has outbursts of rage. Though Indigo often breaks Aster’s possessions, Aster still wants to support her and show her kindness. But when Indigo receives a letter from her mother to say that she is leaving the state with her new boyfriend, Indigo is taken for acute mental health care and Aster goes to stay at Xavier’s house for a few nights. Xavier tells Aster about his desire to change the farm and she agrees to help. They also get Esme, their older friend who works at the ice-cream cafe, onboard.

Throughout the novel Xavier is concerned that his parents are separating. Both Iris and Mike find it difficult to explain their complex situation to Xavier, as they are concerned about the effect on his mental health. Xavier is upset and confesses to Iris that he thinks they are living apart because he is ‘hard work’ but she reveals the truth: that Mike has always wanted to live on and run the farm but Iris was unable to go because she experienced postpartum depression after Xavier’s birth. Iris and Mike love each other, but she forced him to move out so that he could have finally have the opportunity to live out his dream.

Xavier and Aster, with the help of Xavier’s parents, Aunt Noni, Maren and Esme, work to bring their plan for the farm to fruition. On their trial day at the farm with Xavier’s therapy group, Indigo turns up unexpectedly and Xavier experiences a breakdown that sends him back to the clinic. While Xavier is fearful of what may have happened at the farm that day, the group of kids—including Indigo—write to him and express what it meant for them and their hope they can return there one day. And when the tenants extend their time away from the farm, Xavier and his parents have the opportunity his father always dreamed of...

1. Xavier has an eccentric sense of style. In one scene, he uses his mum’s eyeshadow to paint clouds across his face to create a certain aesthetic for his sheep themed outfit. It’s suggested that Xavier uses his unique dress sense as a ‘shield’ from his depression. 2. Minor non-graphic and non-specific mention of self-harm (“Hana sometimes hurt herself on purpose” p21). 3. Xavier and the other kids in group therapy sometimes use the word “crazy” to describe themselves (p16). Indigo Michael calls Xavier a “useless weirdo freak” (p56). Zach comes to therapy with a black eye after being assaulted by kids at school. (p79-80) 4. Willow came to Australia as a refugee. She was placed into a detention centre as a child but doesn’t want to discuss it (p21).5.  Xavier experiences a breakdown and is hospitalised. (Chapter 22, p157).